Create a Bathroom Worthy of The Bates Motel This Halloween! There are so many different ways that you can dress up your bathroom for Halloween, but I think a bloody bathroom is one of the best. Using this Bloody Shower Curtain and building your bathroom decorating around it can give you a great Norman Bates inspired bathroom.

This is guaranteed to leave your guests a little on edge when they go to wash their hands and I doubt you’ll have any long queues as people won’t want to linger where it looks like there’s been a murder!

As soon as I saw this bloody shower curtain on Amazon I could almost hear Janet Leigh’s scream and I just knew what was going to be in our bathroom this Halloween! Read on to see how you can expand on the idea behind this shower curtain to create your very own bathroom of gore – I’ll even share my Psycho movie story with you ……. it’s not just Janet Leigh who can scream!

In a Hurry?  Check out all the bloody bathroom Halloween decor deals.

Creating a Bloody Bathroom SceneWhen I saw the above shower curtain I could hear Janet Leigh’s scream in my head, but if you want to replicate it you could try this shower curtain below that is also inspired by Norman Bates. It comes with a sound box and replicates her scream as people walk into the room – now that’s a great Halloween trick! 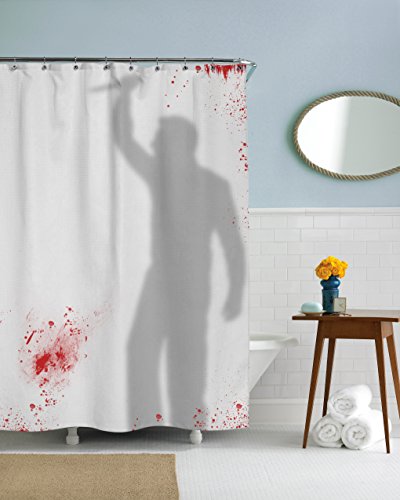 The shadow as well as the blood is guaranteed to make me jump when I see it, even if I’ve put it there myself!
One of the reviewers on Amazon even mentions that they put a strobe light in the shower stall behind this curtain – now my imagination is telling me that it would be an awesome idea…….{{wandering off to see if I can get hold of a strobe light}}
Okay this shower curtain DOES NOT contain the sound box, unfortunately the one I used to feature doesn’t appear to be available anymore, but this is still a cool idea for a shower curtain.

Who’s Norman Bates, what scream? If you’re asking these questions then you haven’t seen the movie Psycho, it’s an absolute classic and Janet Leigh gets killed in the shower when Norman Bates stabs her – now it makes sense doesn’t it? While we’re talking about Psycho let me tell you about my introduction to the movie….

The 1st time I ever watched Psycho was years and years after it was released and what was I doing? Staying in a motel with my hubby. This proved not to be a very good idea.

I was having a shower the next morning (and yes there was a shower curtain) and my hubby came in to see if I wanted a cuppa….I saw the shadow outside of the shower and did a great impression of Janet Leigh! – I’m not allowed to watch Horror movies in motels anymore!

Back to creating a bloody bathroom.

If you don’t use a shower curtain then don’t despair you can still create a bloody bathroom feature by using bloody Halloween clings on the inside of a shower door or the outside of the bathroom window and a bloody bathmat just by the shower is a great touch too.

More Bloody Halloween Decor for Your BathroomThere are lots of different ways of creating a bloody bathroom besides a Norman Bates inspired shower curtain. A great idea is to start off with some crime scene tape and putting it across the bathroom door signalling a crime scene ahead, a liberal amount of fake blood and bloody Halloween clings around your bathroom could create soem great atmosphere.

Not only would this be a fantastic idea for Halloween you could also have a themed Dexter party when the new season begins and create a bloody bathroom for him to investigate.   Alternatively if you want a night in with friends watching horror movies then you can create a bathroom for a bit of fun – I’d hate to be the first unsuspecting guest to need to go to the bathroom!   It would certainly be a night that would be talked about for some time I imagine.

A Few Props for Your Bloody Bathroom Decor

Have you ever decorated your bathroom for Halloween?   If so did you go with a bloody bathroom theme or something else?   Let me know in the comments as you could end up giving us all some great Halloween decorating ideas.