Whether your little girl wants to play dress ups or whether it’s Halloween there’s never a bad time to wear a Draculaura costume is there?   Draculaura is one of the cool students from Monster High and has a huge following among fans.

The daughter of Dracula she may be, but that doesn’t mean she doesn’t want to look as good as any high school girl does.   She loves to brighten up her wardrobe with pink and we’ve managed to find a few of her costumes available for your little girl to wear too.

Let’s have a look at some of Draculaura’s cool costume ideas, although a word of warning if you don’t like pink you may not enjoy this page!

I’ve found a number of ready to wear costumes for sale which are perfect for playing dress up, attending a fancy dress party or just to dress up as your favorite vegetarian vampire this Halloween.   If you’d prefer to make your own Draculaura costume then you’ll find some great ideas here as well.

The first officially released Draculaura costume that was made available was the one I’ve featured in the introduction.  All you need to add to it is your very own Monster High Draculaura wig, add a little make up including her heart shaped birthmark and you’ll look fantastic!

Included in this costume is the shirt with attached vest and mesh sleeves along with the skirt and attached leggings.

As I said you will have to buy the wig separately and the costume also doesn’t include the boots which is a shame as I think they look awesome.

Draculaura is a member of Monster High’s Fear Squad along with the captain Cleo and other friends including Frankie, Lagoona and Ghoulia.

If you don’t know much about Monster High School yourself the Fear Squad is their version of a Cheer Squad and Draculaura’s outfit is black with her favorite pink highlighting it (Frankie’s costume actually has a paler pink than Draculauras).

This outfit also comes complete with pom poms which look like they’re pink and black in the photos, but (I haven’t actually seen this outfit for myself) it’s been reported that they are actually red and white instead.

Is it Time for a Party?

With friends like Draculaura has the answer is a resounding yes!   Draculaura’s Sweet 1600 didn’t quite go according to plan, but it ended up being a great party with her friends and she even got to share it with best bud Frankie Stein who was celebrating her Sweet 16 – days that is!

Just because it’s Draculaura’s special birthday she got to wear a pretty dress and even had a pink tiara all of which you can get in costume form for any young Draculaura fan you may know.

The gorgeous dress is a replica of the one the doll wears and it has a zipper in the back instead of velcro, which I personally prefer. It also comes with a lace capelet which to be honest I wasn’t so impressed with, but I think the dress can be worn without it very easily.

The wig with the pink tiara really helps to add to the whole costume, now you just have to paint on a small pink heart under her left eye to replicate her birthmark and you’re ready to party like a vampire!

There are a few other Draculaura costumes available on the market including a lovely dot dead gorgeous one, but for now I can only find this Scaris costume for you ….

Halloween 2013 saw the Scaris City of Frights! range of Monster High dolls released and you can get the costume based on Draculaura’s doll right here!

The costume is basically a skirt and top in Draculaura’s trademark pink and black, simply add a pair of black pumps, a Draculaura wig and a pink Monster High purse and you’ll look great.

Make Your Own Draculaura Costume

If you want to dress up as Monster High’s own vegan/vegetarian vampire and you don’t want to buy any of the costumes above then you can choose to make your own costume from scratch or compile a few cool items to create your very own costume.

I’m not much of a sewer myself so I love the ‘compiling a costume’ idea, but I’ve found a great video for those of you who want to make your own outfit and I’m sure you’ll love it –

How to Compile Your Own Draculaura Costume

If you’ve decided to make your own costume then you need to think about who Draculaura is – firstly she’s 1600 years old and a vampire which means she does like some classic Gothic inspired things, although she does not like Victorian dresses despite her father buying them for her to wear to school!

Think of black with her trademark flashes of pink to add fun to this dark color, add a few classic touches like buttoned down blouses with ruffles or lace details. She does love lace, but one way in which she has modernized the ‘romantic’ fashion era is by injecting her own sense of fun and wearing lacy tutu/petti style skirts with fishnet tights.

Tall lace up boots are often a part of her costumes, these can be hard to find, but I do have instructions to make your own.

This are cute and gorgeous and are great to build your own costume around, simply add some black tights, white shirt and hot pink tank. Don’t forget her boots …… don’t worry I’m going to give you hints on creating these for yourself further down the page.

Another alternative if you have a plain white or black shirt or even t-shirt would be okay is to wear this shrug over the top of it.

Monster High Pink Draculaura Shrug
Wear this over a flared pink, white or black skirt and fishnet stockings ……. or one of the tutu inspired skirts above would be perfect……. and you’ll have a lovely Draculaura costume idea.

Now I haven’t found a pair of her boots that you can buy, but I do think that these would be cool and could work. I would change the laces over to black and I think it could work really well. If you’re not convinced then you’ll have to make your own boots instead which should be a lot of fun. 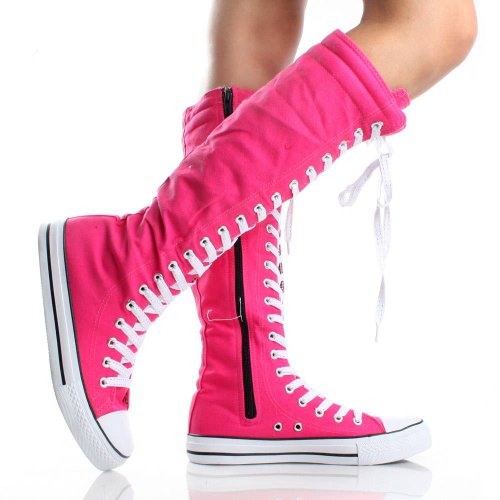 How to Make Your Own Draculaura Boots – A simple step by step guide (including photos) for making a pair of boots to help complete your Draculaura costume.

Make Up, Accessories & the Finishing Touches

The great thing about applying make up to look like Draculaura is that her make up is often smudged or doesn’t look that great because she doesn’t have a reflection when she looks in a mirror – always a relief when you’re trying to look like her!!

One thing you want to get right is her little pink heart shaped birthmark which is what I would always add last.   I would use a lip pencil to draw on the heart and then fill in with either face paint or even lipstick – the lip pencil will just prevent any ‘bleeding’ from the heart.

When it comes to the actual make up you have to remember that she’s a vampire who can’t be in the sun and is also a vegetarian (sometimes even vegan) and this means that she has very pale skin.   I’ve found a great make-up tutorial that is aimed at adults, but can easily be adapted for a child –

When it comes to jewelry I think the best thing you can do (if you have pierced ears that is) is to get two large safety pins and glue them shut.   Next put a stud ear-ring through the hole on the safety pin and put the stud in your ear.   This will create Draculaura’s favorite ear ring look without having to actually put safety pins through your ears.

Another thing that you should think about adding to your costume is an umbrella to keep the sun off of you and an extra little thing would be a small bat to masquerade as Draculaura’s pet, Count Fabulous.

But wait there’s more! This fashion set would make a great gift for any little girl who loves Monster High and also provides lots of little extra touches for a costume. This set is obviously not absolutely needed for a costume, but it does add a certain freakishly fabulous touch that I know lots of young girls would adore.