When I saw the movie Sucker Punch I remember thinking what cool costumes some of the characters wore in the main character’s fantasy world.

It didn’t surprise me in the least when I saw Baby Face, Sweet Pea, Amber, Rocket and Blondie’s costumes available to purchase. I felt that they had an anime look to them – not sure if fans of anime would agree with me though!

The actual movie itself isn’t one I’d watch again as it just didn’t grab me, but the costumes….. well that’s a whole different story.

Let’s have a look at some of the main characters and their costumes.

The costumes that stand out for me with all of the characters are their fantasy fighting outfits and for Baby Doll that’s a navy blue costume with a Lolita style sailor boy top and short skirt with over the knee black stockings.

Baby Doll’s costume also needs a weapon to complete it and her weapon of choice is a sword which she’s very adept at using. 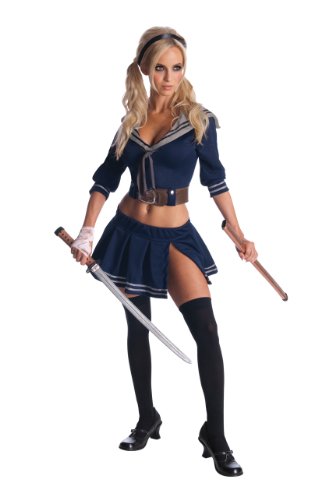 This officially licensed costume includes the top with it’s attached belt, skirt, headpiece and thigh high stockings. What’s not included is the wig or the weapon.

The blonde wig is a great way of getting Baby Dolls hair if you don’t have long blonde hair yourself. If you do then all you need to do is to put it into two pony tails and add the headpiece – perfect!

Baby Doll is the lead character in the movie and it’s her fantasy world that the girls all become fighters in, well actually they first become sex slaves in a brothel, but for the sake of these costumes we’re going to the second fantasy of them as strong fighters.

She befriends four other girls – Sweet Pea and her sister Rocket, Amber and Blondie.

Sucker Punch’s Nod to the Army!

Amber obviously loves a soldier in uniform as she has taken on the Army’s green uniform and added a very sexy touch to them. Add black combat boots, black hot pants and fishnet stockings and a nod to the 1940s with a mini 1940s army hat perched on one side of her head and you have a show stopping costume to wear.

Check it out below – 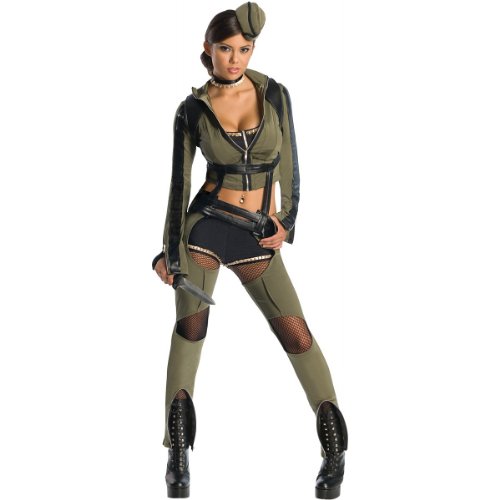 The costume includes the jacket with attached top, shorts, chaps, choker and headpiece. What isn’t included is the the weapon (Amber’s weapon of choice is a dagger), wig and boots.

Amber manages to steal one of the essential items needed for their escape plan to work, unfortunately she is shot before their plan can be put into action.

The first thing you have to know about Blondie is that she isn’t blonde! I’m not sure where the name came from, but Sucker Punch’s Blondie is definitely a brunette!

Unfortunately Blondie can’t keep a secret very well and ends up spilling their escape plan and getting shot in the process. In the fantasy world, however, Blondie had a very ‘kick ass’ costume and wielding an axe in style! 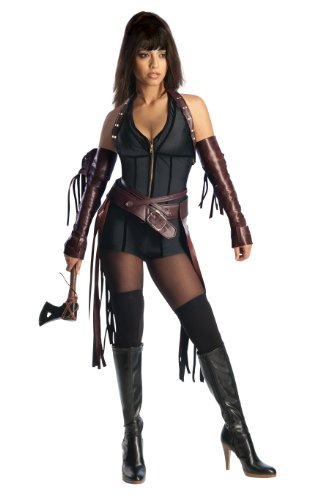 Not included is the wig, boots or her weapon of choice.

Where I see a real Lolita touch in Baby Doll’s costume, with Blondie’s outfit the look is a lot more ‘don’t mess with me’ and I must say I think it’s even cooler because of that!

Rocket is the spunky sister of Sweet Pea, a bit of a rebellious girl who ran away from home before ending up in the asylum. It is because of her that Sweet Pea is there too because she came looking for her.

Rocket loves her sister and appreciates that she’d do anything for her which I believe is why she sacrificed herself for Sweet Pea so that she could escape and live a life on the outside. 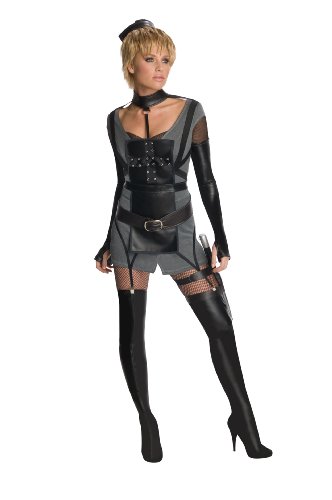 I’m not really sure what I think of Rocket’s fighting costume, it was one of the ones that didn’t really stay with me after the movie, although as I look at this officially licensed one it certainly has something about it – almost like a rebellious punk version of a classic flight attendant’s dress!

The costume includes the dress with attached garters, headpiece, glovettes and belt.

To complete the look you’d need a wig (unless you have short hair that you can style like Rockets), black fishnet stockings and thigh high black boots.

If you want to to be a daring fighter like Rocket you’ll also need to get a knife to wield!

Sweet Pea is a little dubious about the escape plan at first, probably because she’s the more cautious and responsible of the group. As far as fighting costumes go I think her’s is the best and the way she uses her Katana – well I wouldn’t stand in her way!

Sweet Pea certainly seems to have a meatier role that the other three of Baby Dolls friends and she manages to acquire two of the items needed for the escape plan and SPOILER ALERT ends up being the only one to actually escape the asylum. 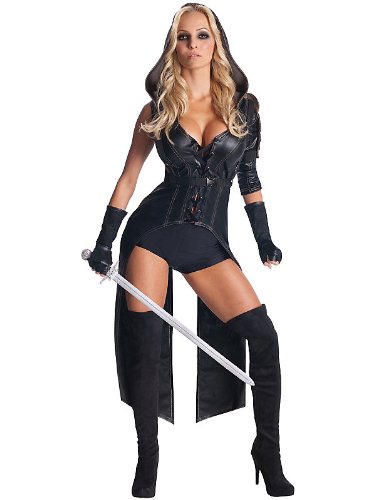 This costume includes a hooded jacket (personally I think it’s the hooded jacket which gives the outfit the something extra that makes it my favorite), brief shorts, glovettes and thigh high stockings.

Not included are Sweet Pea’s weapon and wig.

Although all of these costumes are great by themselves, they are also a really cool group costume idea, if there are more than five of you then you can add other characters from the movie such as Blue and Dr Gorski.