Looking for some 80s costume ideas for women?   You’ve come to the right place if you want to take a trip back in time to the decade that rocked!

If you love the 80s then you might want to throw an eighties party so that you can nostalgically dress in some of the cool 80s fashions, then again you could just go back to the 80s for Halloween this year. Whatever reason you have for wanting to dress up in cool, retro fashion I promise to give you lots of cool costume ideas to choose from.

Create your own 80s outfit, dress like you did way back then or pretend to be an 1980s star – the options are all yours.

Make sure you have plenty of extra strong hold hairspray because we need big hair to go with these outfits – what are you waiting for we’re going back to the 80s man and there’s just no stopping us!

The Most Bodacious Costume Ideas Ever!

There are lots of great costume ideas for women, you can make your own or buy ready made costumes the choice is yours, but what exactly do you want to dress up as?

I’m going to start with a big list of all of the 80s costume ideas I can think of and then we’ll go into more detail on a few of them further down the page. If you see one that takes you fancy and it’s a link then click on the link to go to that part of the page (or another webpage) for more details.

Looking on the Dark Side

The Goth subculture was born in the 80s which is why the Gothic look associated with this decade is often referred to as Traditional Goth (or 80s Goth).   The 80s embraced bands such as The Cure and All About Eve which seemed to embrace the darker side of life.

One of the things that you think about when you think of Goth is black clothing although it was really about irony as well – wearing an old white wedding dress with big Gothic hair was seen (and photographed for Sunday paper excerpts) around cities in the UK etc.

If you’re thinking of creating an 80s Goth costume though I think you should go with the black look that everyone is familiar with.

If you don’t have black hair consider dying it and then back-combing to get a lot of volume, alternatively you could try one of these wigs. This black shag hair do works really well in a Gothic look, it would also work for a punk or rock look too.

The good thing about this particular wig is that it suits for either a male of female costume so if your partner is dressing up in an 80s Goth fashion as well you could get two of them!

If you prefer a longer hair style then you could try the next wig.

Personally I would backcomb this wig a bit to get more volume (I much prefer the one above for a costume idea).

Of course it’s not just about the hair when it comes to creating an 80s Goth costume is it?   You also need to get the make up right, the first thing I think of is the heavy black eyeliner, black eye shadow, pale skin and the choice of bright red or black lipstick (although I’ve seen some costumes where people have worn purple and have pulled it off very well).

Don’t forget the black nail polish.   Back in the 80s it wasn’t as commonly used as it is these days and was really mainly Goths that wore black on their nails.

Next up we have to think of what to wear and a long black skirt is the way to go, you can use a black maxi skirt which would look really good.   What would be even better is if you could find a black 80s petticoat skirt – these skirts had a ragged looking edge to them which was just perfect.

Over the skirt you’ll need to wear an over-sized black t-shirt and to this you can add a studded belt if you like and finish off with a leather jacket if you have one although it’s not really important that you have that, some Goths just wore long black coats, especially in winter.

But what about footwear for a Goth?

Doc Martens are a classic 80s Goth boot – you basically want a pair of boots that say – don’t mess with me – and Doc Martens say that best!

A lady Goth could get away with wearing a Victorian style heeled boot however, although I tended to prefer Doc Marten rip-offs when I was going through my Goth stage, but that was just because I was a broke teen and couldn’t afford genuine DMs.

Two 80s classic dance movies were Flashdance and Fame and between then they introduced legwarmers to the 80s fashion scene!

Not only did we have the two movies mentioned above, but one of them – Fame – spawned a popular television show which meant that dance wear and fashion melded together.

Add the aerobic fitness craze that caught peoples attention during this decade, thanks in part to Jane Fonda’s fitness videos and everyone was ‘Getting Physical’, not just Olivia Newton John!

So how can you pull together a dance or fitness inspired 80s costume?

You first step for this costume is to get a high cut leotard. You wear this leotard over the top of either leggings or bike pants with either a pair of slouch socks or (preferably) leg warmers and some sneakers.

Next you’ll want to wear a thin belt around your waist (you want to be sure everyone notices your waistline, your sweaty aerobics classes aren’t being taken for fun you know!).

An optional idea is to wear an 80s string vest over the top of your leotard, either black if you’re wearing bright colors or if you have fairly muted colors then make sure the vest is a neon color (neon pink is particularly nice over grey or black workout clothes). Alternatively you can wear an off the shoulder t-shirt over your leotard. You can source these shirts in a number of high street shops these days or else you can take a pair of scissors to a t-shirt that you already own.

Here’s a tutorial on transforming one of your existing t-shirts into an off the shoulder cute top – DIY Off the Shoulder Shirt.

Now you need to add sweatband to your wrists and you’re nearly ready.

As far as make up is concerned I would just add clear (or very pale pink) lip gloss, but a little blue mascara is a nice touch if you want to add more than just lip gloss. If you have long hair then the easiest way to wear it is in a simple, high ponytail. If you have shorter hair then try and lift it abit (google 80s hairstyles for ideas), next (and very importantly) you’ll need to add a headband!

I love Pac Man it really is an iconic 80s video game which makes it perfect as a costume idea. Some of the Pacman costumes are unisex which are cool, but some are made especially for women in the form of tank dresses. I’ve added a selection of both for you to look at here –

Both the power pellet style of costume featured above and the lady’s pinky costume are available in all of the ‘ghosts’ namely Inky, Blinky, Pinky and Clyde as well as the power pellet. You can make a group costume up with your friends including Pacman himself along with all four ‘ghosts’ and if you have a sixth person a power pellet as well.

Another fun and iconic 80s game is the rubiks cube, I say game, but for many it was a source of extreme frustration! It is a quickly recognized icon of the eighties however which makes it a great costume idea.

You can buy this costume here or make your very own costume, all you need is a big box, paint and black electrical tape. 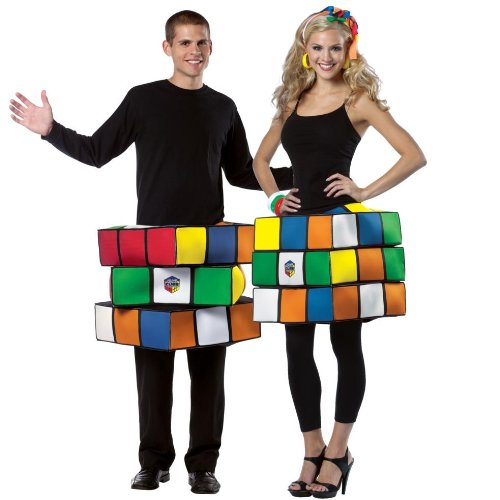 It’s been a few years since I made a Rubiks Cube costume, but I do remember that I had forgotten I would need to go to the toilet much to my friend’s amusement!

Now how you wear this will depend on the size of the box you get – if you get a big enough one you could have the top resting on your shoulder, otherwise you’ll need to use braces to keep it in place around the middle of your body.

I cut out the bottom of the box so that I could walk properly, I also cut a good size hole in the top so that I could fit it over my head, but not too big so that it could sit on my shoulders – obviously if you’re wearing yours lower you’ll have to see if your shoulders or hips are the smallest and cut a hole to accommodate them.

I also had arm holes cut out of two sides of the box, but if you’re using braces to keep the cube around your middle you won’t need these.

Now paint each side of your box a different color, using the colors of the rubiks cube – red, orange, yellow, blue, white and green. Now you need to use the black electrical tape to transform these solid colored sides into nine smaller squares.

Wear black leggings and a black t-shirt underneath the box.

Ready Made 80s Costumes for Women

There are so many different ideas for costumes I just had to add these fun ideas to the page for you to look at as well.

Ideas for Creating Your Own 80s Costumes