Zombies and boys seem to have been made for each other which is why I predict that some will want to wear these fun zombie costumes all the time and not just for Halloween or a fancy dress occasion etc.

You can combine zombies with superheroes or music stars or more. Remember the saying that zombies were people too? This means that any costume you can think of can be turned into a zombie version of it, why even the sock monkey can become a zombie and that’s a scary thought for me!

Let’s have a look at some of the fun, yet gruesome costume ideas that boys will love….

An Unlikely Zombie, But A Cool Costume!

I love the look of this costume although it’s unlikely that a sock monkey would ever become a zombie, it’s still a cool idea. Since sock monkeys were first made out of actual socks in Victorian times they have been endeared by children around the world. Although the present day sock monkeys probably wouldn’t recognize their ancestors they have become something of a cult in modern society and they even have their own festival which may have been where someone dreamed up the idea of a zombie sock monkey too! 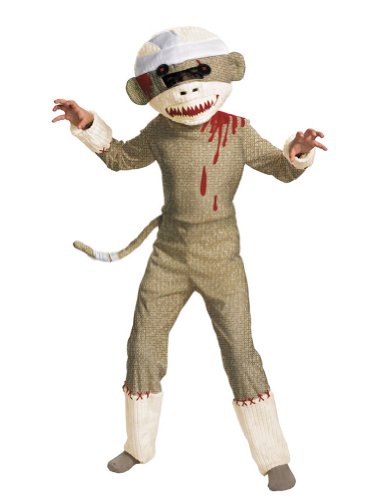 This child’s costume is basically made up of a jumpsuit with a detachable tail and a soft headpiece and it’s guaranteed to bring a smile to your child’s face, unless they were looking forward to adding some gruesome zombie make up to their faces in which case you might want to consider one of the other costumes available.

A Popular Boys Costume with a Twist!

Let your child go from ‘Arrrrhh me Hearties’ to mere grunts with this costume – it’s also a great way to get yourself ready for boy teendom I believe! There are a few different zombie pirate costumes available as well as the one I’ve featured here, but another option is to use an old pirate costume if he has one.

Last year’s costume may be a little short in the arms and/or legs, but once you rip them a little bit no one will notice they’ll just think that’s what a zombie pirate looks like! Be sure to add some dirt and fake blood and you have a perfect costume that didn’t cost you anything! 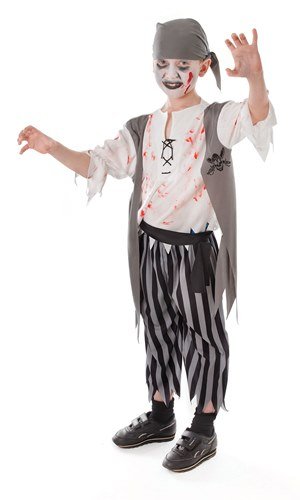 If you do need to buy the costume then this one leaves the face clear so that you can hone your face painting skills or if you’re feeling very adventurous (and your child will stay still for longer than five minutes) you could even try using liquid latex to create some amazing ‘wounds’ for his face.

I just go onto YouTube for inspiration, there are some amazing tutorials on there for both zombie face painting and using liquid latex to provide a cool zombie look.

Not Even Ninja’s Can Escape the Zombie Apocalypse!

Ninjas seem to be an eternally popular costumes for boys, but what about a ninja that wasn’t quite as invisible as he thought who managed to get trapped by zombies and was made one of the undead? I think this would make the costume even more appealing to some of the boys I know!

This zombie ninja costume includes a fabric mask which means all you need to do is use some black or grey face paint around his eyes to create the illusion of sunken eyes and make any other parts of the face that show through a greyish color – it certainly beats having to transform his whole face into something befitting a member of the undead! 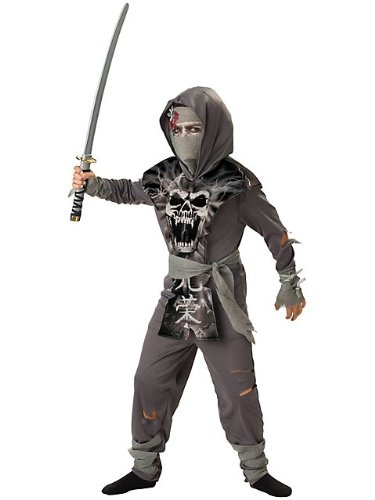 Unfortunately the costume doesn’t include the sword, which means you’ll have to buy that separately because you can’t really be a ninja without it can you? Of course you may already have a ninja sword in which case all you need is this four piece fancy dress outfit.

From Superhero to a Member of the Undead!

I have no idea how Batman was turned into a zombie, but I’m pretty sure that this is the end of Gotham City because without the dark knight himself how will they stop the undead from taking over the entire city. Next you’ll be seeing Commissioner Gordon, Robin and even Alfred as zombies …….

Superheroes are always a popular costume choice among boys, I know every time I see my youngest nephews they seem to be in different superhero costumes or if they’re not in costumes they’re sporting superhero t-shirts etc. I think the eldest of the brothers will be starting to look for something a little more ‘big boy’ by the time next Halloween comes so I’ll have to ask his mum whether or not he’s ‘discovered’ zombies yet! 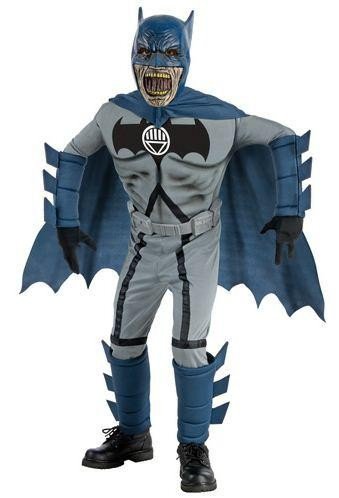 The mask that comes with this costume is truly gruesome and will save you having to weave your magic as far as face paint goes. It is definitely for older boys though as I imagine some of the younger ones would have nightmares just looking at the mask!

The costume also comes with the jumpsuit, but not the boots or gloves and I have to say that Batman is a much ‘tidier’ zombie than most, if it wasn’t for the mask you wouldn’t realize he was one of the undead!